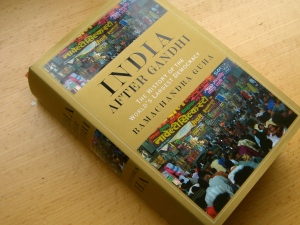 This book has been on my shelf for a couple of years now. But it was only after buying this author’s latest work, that I started reading this. But for the fear of ending up with carpal tunnel syndrome or a sprained wrist, I would not have put the book down. Close to a 800 pages, appendices not included.

There are many reasons why you must read this book, and if you are an Indian, not a single reason why you shouldn’t. Well, unless you already know everything by instinct, and don’t care for facts and recorded history.

India After Gandhi is about the process of nation building; about what it took to make a cohesive country out of innumerable heterogeneous factions. What stays back with you is the realisation that the job is not done. Despite a bloody partition, this was a job well-begun, and hence turns on its head the popular saying, because it’s nowhere close to being half-done.

The heterogeneousness meant that going forward demanded a certain degree of unravelling, to go back and redo things, to hold back plans, to not go ahead as planned but to wait and watch…

So a constitution was conceived, and had to be implemented over a period of time. Statesmen with opposing and diverse views put aside personal agenda and worked on a national one. The flaws of the decisions then were born of good intent, and not for the sake of political mileage.

With this book, I recognise how critical Nehru’s vision and inclusivity was to create the idea of India. But for his paternal blind-spot, he would truly rank amongst the stalwarts of his period.

But, for me the hero of this book, and the initial period it covers, is Dr B R Ambedkar. Unfortunately, he has more or less been relegated to the role of a pioneering Dalit leader now, and in a far less emphatic way as the father of the constitution. This is because politics trumps statesmanship, and politics needs a Dalit icon.

The book quotes him warning against popular protests as a recourse over constitutional means. He also warns against the dankest of hero-worship, ‘of placing individual leaders on a pedestal so high that they are always immune from criticism.’

As Guha observes, popular protests are now encouraged by the ‘rise of identity politics’ (caste or religion) and Parliamentary debates have degenerated into slanging matches.

Indian nationhood and its fledgling democracy was summarily dismissed by many during the period, and highly lauded by a few. Its secularism has been attacked, challenged and ridiculed. “Like Indian democracy, Indian secularism is also a story that combines success with failure,” the author writes.

In India today, as the right wing gets louder and more mainstream, and socialist principles that founded the nation are being framed as a failure, I fear that the intent of ‘India’ of 1947 might be lost in all the noise that online media generates; that the right might hijack a national narrative.

Information that has neither been corroborated or researched can become a sacred truth if it has ‘viral’ value and enough shares.

In such circumstances, books such as these need to find a large audience. To argue and disagree with, even, but based on facts.

There is now a constant harking back to the golden era of a ‘Hindu’ civilisation. What the Indian constitution in effect did was remove much of the regressive factors of that ‘golden’ era. It attempted to ensure equality at several levels, it was feminist in its outlook… It gave precedence to evolution of a civil society over religious dogma. It placed trust in the judiciary and the executive. It’s failing or naivety was that it didn’t foresee the corruptibility of man.

Let me end this review with a few lines from the book:

“Those older anticipations of India’s demise was greatly exaggerated. For the constitution forged by the nation’s founding fathers allowed cultural heterogeneity to flourish within the ambit of a single (and democratic) nation-state. However, these celebrations of India’s imminent rise to power are premature as well. […] It was mistaken, then, to see India as swiftly going down the tube; it is mistaken, now, to see it as soon taking its place among the elect of the earth.” 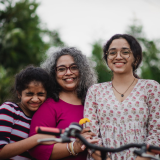